NAR Report: These Are the Top Home Improvements 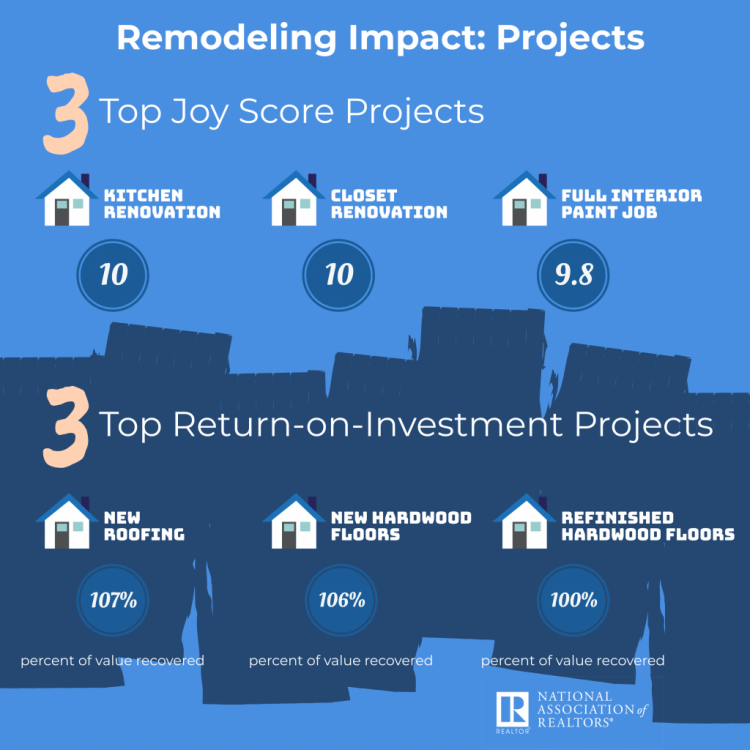 Homeowners and REALTORS® alike want new roofs and kitchens. According to the 2019 Remodeling Impact Report, released by the National Association of REALTORS® (NAR), the two projects rank as the most popular home improvement projects among both demographics.

The report, which examines homeowners' reasons for completing the projects ranked, also provides the costs and seller recovery values for many of the tasks.

Although NAR regularly releases similar reports, this is the first time since 2017 the organization has released this report, and there are some notable differences from what was included in that iteration two years ago.

"This year, we saw the estimated cost of closet renovations increase from 2017; however, we also saw an increase in the cost recovered from this project," Brandi Snowden, director of Member and Consumer Survey Research at NAR, tells Housecall. "Because homeowners are staying longer in their homes, we see them investing more elaborately than in the past."

Another effect of homeowners staying in their residences longer is they're choosing to invest their money in projects that they'll use on a daily basis, and that will improve the functionality and livability of their home.

Aside from kitchen renovations and upgrades and closet renovations, other interior projects hugely popular with both homeowners and REALTORS® this year are HVAC replacements, new wood flooring, bathroom renovations and adding new bathrooms.

As far as exterior projects, the REALTORS® surveyed in the report note that new roofing was most popular among homeowners, and, in their opinion, would add the most value to a home. Other exterior projects that ticked off both of these boxes were new vinyl windows, new vinyl siding, new garage doors and new fiber-cement siding.

Additionally, a Joy Score was calculated by NAR for each of the projects reported. This score is based on the happiness homeowners noted for each of the renovations. For exterior projects, new fiberglass and steel front doors scored the highest Joy Score each, at 9.7.