What Are the Most Popular Home Styles in St. Louis? 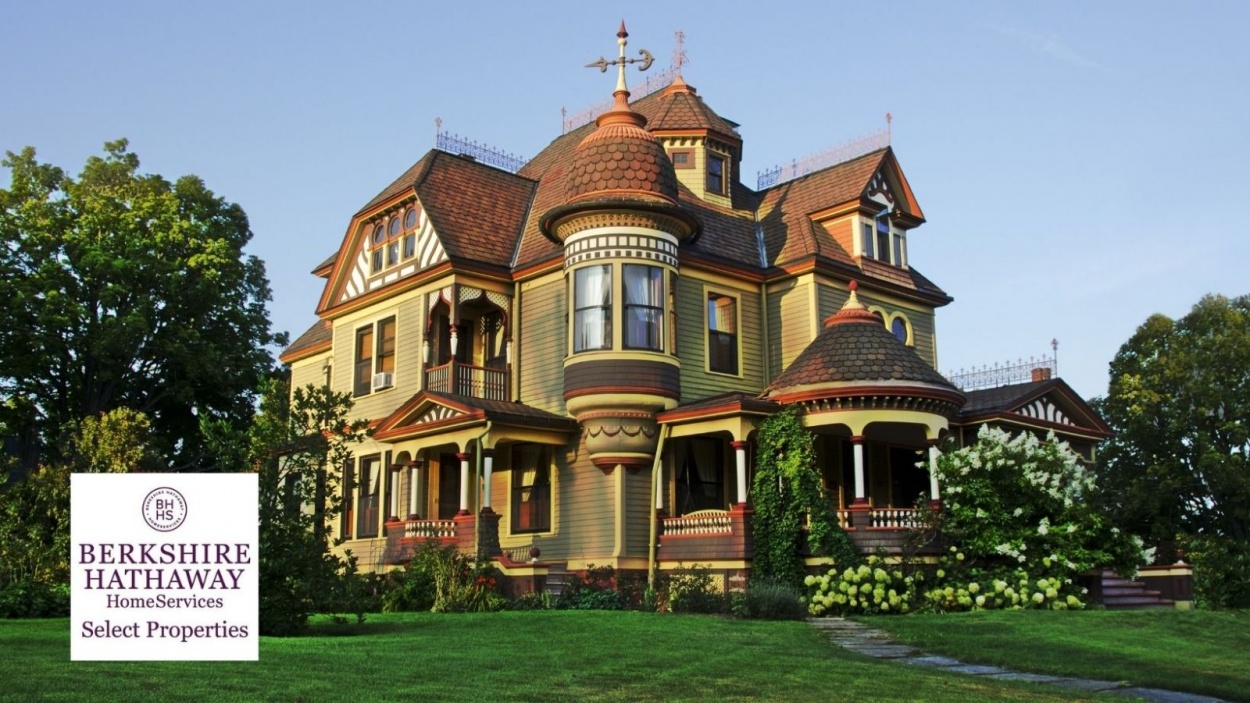 Just like clothing fashions, home trends come and go and are reflected in the types of homes that are popular. The difference is that houses stick around a lot longer than clothes. When it comes to St. Louis home styles, many houses built more than 100 years ago are still standing, as are houses from every era since.

There are houses to fit just about every taste in St. Louis and the surrounding area. And while they may not be unique to the city, there are a few types of homes that are common in the St. Louis region. Here are some of the styles you are most likely to see:

St. Louis is dotted with old, historic homes in a variety of classic styles. They were built to last with natural materials like stone, hardwood, and brick. The ones that have survived this long often illustrate the height of luxury of their time. Indeed, even today, some might be considered mansions. Because of their size, it is not unusual to find old, stately houses broken up into apartments.

There is always interest in these historic homes from buyers who are willing to take on the special care and upkeep necessary to keep the houses livable. St. Louis home styles (and American architecture in general) have borrowed from classic European designs that were popular during the decade they were built. But it is sometimes difficult to pinpoint a specific style or construction era. There is often overlap, cobbling together features from more than one style into one home.

These are some of the classic and historic styles found in St. Louis homes:

Greek Revival. This is just one of the many examples of architects borrowing ideas from other times and parts of the world. In the mid-1800s, houses with pillars and formal porticos at the entrance were all the rage. Inside, expect a grand staircase and rooms that are spacious and formal.

Italianate. Instead of a Greek temple, Italianate homes copied the style of villas. Made of stone or stucco, these also had columns. Ornate carved wood, tile, and wrought iron often were part of construction.

Victorian. Also called Queen Anne homes, these are often compared to doll houses. Often constructed of wood, this type of home typically has a wide, wrap around porch and contrasting trim. There may even be a turret or two.

Colonial. Made of brick or wood, colonial homes are similar to what one might find in historic areas on the East Coast. These are typically rectangular and symmetrical with the front door at the center and windows lined up along the front. The term “colonial” has many variations: British, Dutch, or French to name a few.

Tudor Revival. St. Louisans are very familiar with this “gingerbread” style that looks like it jumped off the pages of a storybook. Brick construction, sloping rooflines, and curved doorways are all examples of this classic which became popular in the 1920s. Often smaller (and more affordable) than some of the other homes in the classic/historic category, they are desirable for those wanting to live in a little bit of St. Louis history.

Another category of St. Louis home styles consists of houses built in the early to mid-20th century. St. Louis was one of the largest brick manufacturing cities during that period, resulting in the abundance of brick homes everywhere in the region.

Home buyers often seek out some of these styles out of a sense of nostalgia. Whether they remember the hominess of their own grandparents’ post WWII bungalow or the stylish 1970s vibe of the Brady Bunch house, everything old is eventually new again—and desirable on the housing market.

Here are some of the more recent types of homes that are popular in St. Louis:

Bungalow. Like Tudor Revivals, bungalows are everywhere in St. Louis. Brick or wood, they often sit on small lots. The St. Louis variety of this home often has a front porch. Rooflines slope toward the front and back of the house. Many are one story. If there is a second floor, its ceilings and walls might slope to follow the roof. They are sometimes also called Cape Cods, especially if they have shingles and dormer windows.

Foursquare. Sometimes called a Prairie Box, these houses are cube-shaped. There are typically two floors of identical size, plus an attic. They have what is known as a “hip roof,” meaning the roof starts at a single point at the center point and slopes down toward all four outer walls. The design often includes a front porch and symmetrical rooms and windows.

Mid-Century Modern. This often refers to the interior design rather than the architecture, but in St. Louis, the most common were called ranches or ramblers when built. Because they are one story rectangle or L-shaped houses, their footprint can be large and sprawling. A large picture window in the living room is a common feature. At the time, these homes were “ultra-modern” or even “space-age” with their clean lines and minimalist designs. These are one of the first types of homes to incorporate an attached garage. 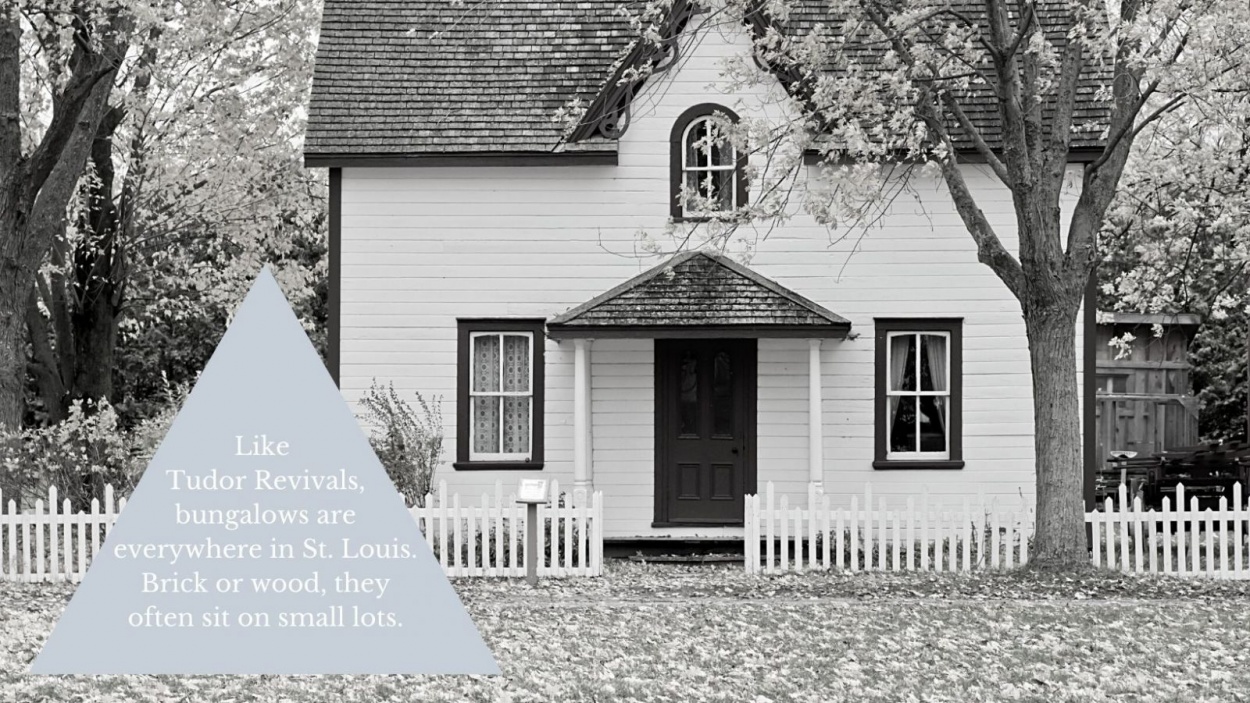 A big difference in today’s homes are construction materials. Where builders once used hardwoods, brick, and plaster, now one might find plywood, drywall, metal, and concrete. Vinyl or aluminum siding has largely replaced exterior paint and tuckpointing.

While there are some newer styles of homes, many new builds borrow features from past eras. For example, modern versions of the bungalow are popular, especially in the Craftsman style that was popular in the early 1900s. No matter what style a house resembles, some features are common throughout. In most cases, floor plans are open rather than sectioned-off rooms. People want “smart homes” that incorporate the latest technology into daily life.

These are some of the types of homes built in recent decades in St. Louis:

“Neo” Styles. Much like the classic and historic revivals mentioned above, there are homes designed as neo-Colonial, neo-Victorian, and of course the neo-bungalow. The desirable features of each are incorporated into new construction with the things that people expect in a house today, like bigger bathrooms and kitchens, more closets, open floor plans, and the latest technology throughout.

Atrium Ranch. This trend in newer construction looks like a ranch home from the front, but grading of the yard allows for a walk-out basement at the back. This creates the opportunity for plenty of windows, resulting in an “atrium” feel.

Prefab homes. Prefabricated homes are not new. In fact, Sears Roebuck once sold bungalows from their catalogs! Nowadays, however, modular homes or premade home “kits” provide an efficient and economical way to build homes quickly. These also sometimes fit into the “tiny house” trend of living in as little square footage as possible.

What is Your St. Louis Home Style?

The wide variety of St. Louis home styles is an illustration of the city’s history. Old and new blend together in neighborhoods or even under one roof! New homes with the most up-to-date features for modern-day living will always be popular. At the same time, there will always be renewed interest in some old trends, making older or vintage homes desirable.

In St. Louis, there are options for lovers of all of these styles. The agents of Berkshire Hathaway HomeServices Select Properties can help you find the ideal style to suit you and your family.